Smart Cities in Africa. The Smart Move or another White Elephant that brings crushing debt 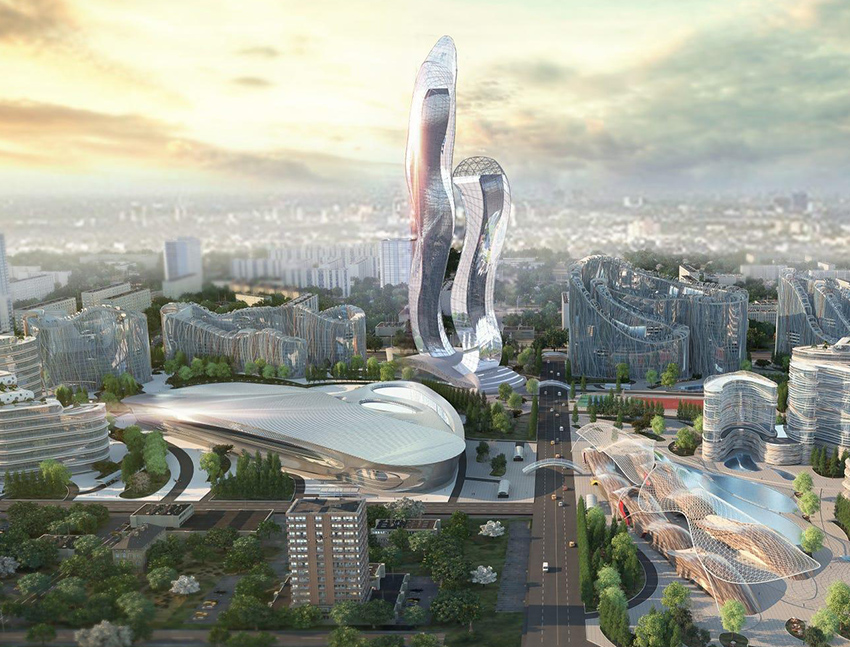 A shorter version of this article appeared in Business Day, South Africa on 23rd March 2020

Last month President Ramaphosa in his SONA heralded the forthcoming construction of a new 5G-ready smart city around Lanseria Airport in the next decade.  With it, South Africa was belatedly thrust to the front of a Continent-wide rush to establish so-called smart and eco-friendly cities, seen as a means of jump-starting the so-called Fourth Industrial Revolution powered by digital technology.

The ‘Mega Project for Integrated Residential Development at Lanseria Airport City’, to give it its official title, has been described as ‘designed to promote a new city form of cross-cultural living’ in the Gauteng Province literature. It has also been lauded as ‘a truly post-apartheid city’ that ‘will be a leading benchmark for green infrastructure continental and internationally’ by President Ramaphosa himself in SONA.

The President, however, has been much criticised for his continued focus on heady goals and projects that are in stark contrast to the grim economic realities that South Africa faces today. But he is not alone this time. Smart city fever took hold in Africa more than a decade ago. There are currently 10 smart city zones in various stages of development in 54 African countries. The most prominent include Kenya’s Konza Technopolis, Nigeria’s Eko Atlantic City, Ethiopia’s Wakanda City, Rwanda’s Vision City and Ghana’s Hope City. While all are public-private partnerships, the levels of public funding still required, especially in infrastructural development, are jaw-dropping. With so much at stake for countries that are already overburdened with debt, it is important to question whether such grandiose plans truly serve the best interests of the African economy and populace as a whole.

On the face of it, smart city urban planning can be seen as the natural evolution of the tech hub boom and the impressive digital infrastructural development witnessed across Africa within the last decade. Unburdened by so-called legacy infrastructure (older technology, such as that exists in the developed world), Africa has pole-vaulted straight into the digital age at pace.

Tech hubs have exploded in the last five years, from 117 in 2015 to over 600, with a 40% increase in 2018-19 alone. They also act as development catalysts, attracting FDI (foreign direct investment) and creating tens of thousands of jobs.   Coupled with the rapid adoption rates of digital tech, that has seen internet download speeds almost triple in the last 5 years with the establishment of Continent-wide fibre optic connections and smartphone penetration set to increase from 33% in 2018 to 66% in sub-Saharan Africa by 2025.  A Deloitte Report claims that a 10% uptick in mobile phone penetration leads to a GDP increase of as much as 1.2% in low to middle-income countries.

At the same time, there have been large increases in rates of urbanisation across Africa.  Projected to be the fastest growing globally in the coming decade and that will see half of all Africans live in urban areas by 2050, most of whom will be under 25.

By harnessing Africa’s relatively young and innovative population, and building on its budding success in the digital economy, it is hoped that smart cities will solve its massive social problems. The exploding middle classes, who are at the heart of economic growth in any economy, are expected to swarm to them to take advantage of their cutting-edge facilities and job opportunities.

Or so goes the theory. One relentlessly expounded by the African Government, investment banks and ICT reports, as well as international property developers – all keen to join the smart city bandwagon in Africa.

This concept of smart cities initially grew out of the rubble of the 2008 global financial crash and the downturn in urban property development. International property investment companies, hungry for new high-yield frontiers, found that their appetite for speculative urbanism sat comfortably with the new-found visionary idealism of leaders across the African Continent brought on by the advent of the tech boom.

This utopian concept went on to become a throwaway marketing term, empty of substance and used simply to appeal to investors.  It is arguable whether many of these plans actually could be called ‘smart’ in the proper sense of the word.

More than a decade on, there is little to show for the initial optimism. Many of the projects have seen slow progress or come to a complete standstill. In many cases, the lofty visions first proposed collided with the stark realities of a complete lack of an infrastructural base to begin with.

It is easy to claim that no-legacy infrastructure puts Africa in good stead to take advantage of smart city technology, but when there is not even basic amenities such as a constant and reliable supply of water and electricity, then building smart cities becomes a moot point.

The ones that have taken shape, such as Konza Technopolis on the outskirts of Nairobi have been beset by problems from the start.  Cumbersome bureaucracy, in particular, in the land acquisition process caused severe delays and the slow release of public funds, meant to make up only a small portion of the entire investment took years to materialise.  Even so, in the last year there has been a flurry of activity with the first phase of basic infrastructural investment to be completed by 2022.  This will include a dedicated power and water supply as well as road upgrades and a sewerage system.  The vast majority of this has been achieved through concessional loans that has left Kenya with an over-burdened debt ratio that is over 7 times that of GDP.

The vast majority of these loans have also been through China Exim Bank, a state bank set up to promote the industrial, trade and economic interests of China in the developing world, with Huawei and Zhongxing Telecommunications Equipment Corporation commissioned to build the digital infrastructure for Konza.

With 60% of all country debt funded by Chinese concessional loans, Kenya’s exposure might make it vulnerable not just economically but politically to China’s every whim and the recent restrictions placed by US and to a lesser extent by EU on Chinese 5G tech, may drive away other sources of potential funding in future.

Apart from debt, smart cities may also end up exacerbating the very problems they claim to solve – especially the rich and poor divide on the Continent – with potentially devastating consequences for social and political stability.   It is questionable how committed private developers are to providing a decent stock of low-cost housing in these developments, when at best they seem to be an afterthought and at worst there is downright opposition to them.

The experience of Rwanda’s Kigali Smart Neighbourhood Project is a case in point. Their visions of creating a tech-enabled neighbourhood with solar-powered lights and free wifi was brought into question when it became clear that slums were cleared for the project and each new house would cost upward of US$160,000. This is in a city where monthly earnings are below US$240 per month.

In fact, the general claim that the dramatic increase in the African middle classes will drive demand for these shiny new cities is debatable at best when the African Development Bank defines the middle classes in Africa as those that spend between US$2–20 per day. Not exactly a level of expenditure in line with average housing costs envisaged in smart cities.

Truth be told, South Africa has been down the smart city route before in 2013 with the Modderfontein ‘African Manhattan’ new city district development that would have included an eco-city with skyscrapers, high-end housing and offices and an entertainment zone on a 1600 hectare site.  The project fell through when the Chinese developers, the Zandai Group, refused to even consider low-cost affordable housing as part of the project and the City of Johannesburg government held out on giving planning permission for two and half years as a result.  Eventually the plot of land was sold and the project was confined to the dustbin of history.

It may be that South Africa is different in that its infrastructure and middle classes are more sophisticated than elsewhere on the Continent, but this does not mean the same problems will not apply.  Taking on such a large public debt burden when the GDP to debt ratio is already strained and at a time of a forthcoming global economic downturn is questionable at best.

It begs the question whether the money would be better spent on more support for the successful tech hub culture.  This includes targeted training programs in the digital realm, giving better access to capital funding for start-up companies, modernising outdated telecommunications regulation and bringing telecommunications costs down as a recent SADA report (South Africa I the Digital Age) suggested and of course, getting the basics right and in particular, establishing a reliable power supply once again.

If history is not to repeat itself, South Africa must take stock and pause for thought before taking such a big gamble on what has been described as the future of the Continent.  And that may just turn into another bloated white elephant that encumbers Africa with yet more catastrophic debt for years to come.