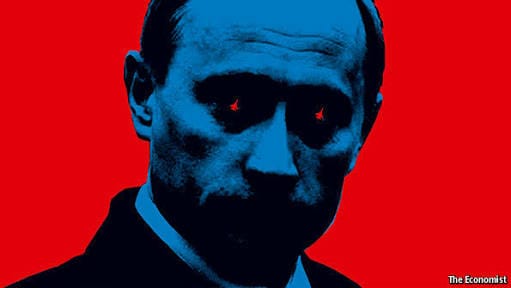 As the world vacillates between accommodating Putin and issuing threats of punitive measures – mainly in the form of debilitating economic sanctions, Russia continues its ominous invasion-level military build-up along the borders of Ukraine undeterred. And we embark on yet another round of that decade’s old guessing game we like to indulge in from time to time – divining Putin’s ultimate intentions and goals.

In a highly unusual move, Russia recently publicly issued its set of demands in the form of 9 articles that were published on the Ministry of Foreign Affairs website:

The main drive of the demands is the desire for NATO to desist from any further eastward expansion, in particular in Ukraine, and to pull all its military hardware and troops back to pre-May 1997 NATO members .  That includes pulling out from the likes of the Czech Republic, Poland, Romania, Bulgaria and the Baltic States.

And while the U.S and the West in general consider Putin’s demands and decide whether he is acting in good faith, whether the articles can be used as a starting point for further negotiations to deescalate tensions, or whether the demands are yet another ruse, purposely set at such a high bar as to be doomed to fail, from the start, and used as a pretext to invade, Putin’s next move remains obscure.

For the man has proved to be the ultimate obfuscator.  Borne out of his extensive time in the KGB, stationed in Berlin in the 1980s, Putin has kept his cards close to his chest.

But with Putin, if you stand back and cut through all the noise that surrounds the secretive man, his intentions are there for all to see – and have been from the start.  And with that realisation a terror sets in.  While he is patient and cunning, he has demonstrated a single-minded ruthlessness in his approach. It is clear that he is prepared to go to extremes to achieve that ultimate goal that leaves you in no doubt as to where we are heading over Ukraine – to regain the former Soviet sphere of influence in Eastern Europe.

And he will do anything to achieve this.

A month after he ascended as acting Prime Minister of the Russian Federation, there were a series of mysterious explosions that ripped through apartment buildings in Moscow, Buynaksk and Volgodonsk in September 1999.  The explosions killed more than 300 Russian citizens and injured over a thousand.  They were blamed on Chechen separatists and were used as a pretext to restart the war with Chechnya that saw the province taken back under Russian control.  The explosions solidified Putin’s grip on power and signalled the start of this diminutive man’s rise – this man who many thought wouldn’t last long and would be easily pliable.

The problem is that there is more than enough circumstantial evidence that points to the FSB (the KGB’s successor) as having orchestrated the whole affair.  Another device similar to the others was found and apparently defused in the Russian city of Ryazan after the vigilance of those living in the apartment block.  Three FSB agents were apprehended as having planted the device but shortly after their arrest, it was suddenly claimed only to have been a training exercise and the device was supposedly only filled with sugar.

So much mystery surrounds these bombings.  Of course, when anyone has attempted to investigate them, they have often met an untimely end.  There is even a Wikipedia page dedicated to all those who have been killed after the event, that were somehow connected to investigations into the events or were tied to the bombings.

It makes the random deaths apparently orchestrated by the unseen hand of the Devil himself in Gregory Peck’s 1976 film, The Omen look like a PG-13 dark animation fun-fest:

They range from the suspicious deaths of the FSB agents said to have planted or overseen the bombings, to the likes of Anna Politkovskaya, a highly-respected journalist who was investigating them at the time of her death (and shot in the head in the elevator of her apartment building), to the politicians on an unofficial committee (Sergei Kovalev Commission) set up in 2003 to look into the bombings, to Alexander Litvinenko, famously killed with polonium tea administered in a hotel in London and who authored a book on the subject.

If these actions highlight anything it is Putin’s brutal singular focus is his desire to regain that lost sphere of influence of the countries on his western borders.   A man prepared to kill his own citizens without batting an eyelid will not be halted by economic sanctions.

And if you look since then, he has sought to consolidate his westward movement.  Slowly but surely, taking action where and when the opportunity arose – with the partial invasions of Georgia in 2008 and again in Ukraine in 2014.  He has undermined elections through cyber warfare and more nefarious means – such as the attempted assassination of Montenegro’s Prime Minister and failed coup plot in 2016 apparently orchestrated with the dark hand of Russia.  Montenegro ascended to NATO membership one year later in 2017.

The narrative that Putin and those closest to him like to present though has been the same for decades.  It is that of an aggrieved nation – the perennial victim – which has been treated unfairly by the mighty advancing, duplicitous and menacing West, forever out to undermine Russia and secretly desiring its failure.

And for a while, this narrative caught on.  Many, even in the West were sympathetic to Putin, right until his invasion of the Ukrainian territory of Crimea in 2014. They bought into his carefully fostered image of a plucky leader of a relatively weak and humble nation, standing up to the mighty, domineering West.

The problem with this narrative is that it fails to take into account Russia’s own part in all of this and most importantly the desires and sentiments of the former east bloc countries; nearly all of them desire to be part of the western sphere of influence and in particular NATO and the E.U.  They desire this because they fear and reject Putin’s Russia – which has nothing except hydrocarbons to offer them economically and is forever the aggressor, strong-arming them into submission where possible by switching off the gas taps when it suits Putin and undermining their democratic institutions.  In fact NATO never had troops in the countries that joined its alliance after 1997 until Russia’s invasion of Crimea.

And with time Putin’s actions have become more brazen giving the West less reason than ever to comply with his demands. The election interference in the U.S in 2016 is a powerful case in point.  As the West has acquiesced and slowly turned inwards after the 2008 financial crisis, tiring of foreign adventures after Iraq, so Putin has stepped in and grown bolder in his foreign ventures.

Take Syria when Obama backed out of Syria in 2013, after expressly having threatened to undertake a bombing campaign when Syria’s President Assad crossed Obama’s so-called ‘red-lines’ and solid evidence had emerged of his use of chemical weapons against his own people.  And consider Libya to the Central African Republic where Russia has inserted itself as the main player in France’s traditional backyard and now threatens to outmanoeuvre the old colonial power in Mali. In all of these instances, Putin has used every opportunity presented to him to further undermine the West.

For the one thing Putin abhors is a power vacuum.  Blink and present him with an opening and he will fill it without a moment’s hesitation.

It is no coincidence that the now-infamous Internet Research Agency, the troll-farm run by one of Putin’s closest allies, Yevgeny Prigozhin, and that was singled out for condemnation for its part in undermining the 2016 U.S election by the Special Counsel Robert Mueller’s investigation, was set up in 2013 – within months of Obama’s capitulation over Syria.  It is likely this very moment that Putin smelt weakness in the West and endeavoured to drive home his advantage everywhere and anywhere he could.

Like the pre-first world war colonial rulers of old, Putin sees the world as something to be carved up between the strongest and boldest nations.  He fundamentally doesn’t seem to perceive the smaller nations on his doorstep as independent states, but rather as pawns to be bargained over above their heads with the E.U, U.S and NATO. He perceives their desire for democracy, economic betterment and the safety of western institutions as a big plot, orchestrated ultimately by the West.

While, a potential invasion of Ukraine certainly won’t spark direct confrontation between NATO and Russia, it will put us on the inevitable path toward it.  We are at the equivalent of March 1939 and the invasion of the remainder of what was then Czechoslovakia after Hitler had invaded the predominantly German-speaking areas of the Sudetenland the previous year.  When U.K, France and its allies finally, belatedly, realised that there was no appeasing Hitler. Acquiesce to Putin’s demands over Ukraine, and, given his past actions, he will likely use this as a pretext to further his sphere of influence in Eastern Europe – in the Baltic States, in the Balkans – even in Poland, on Germany’s own doorstep.

Give him a power vacuum and he will eagerly fill it for you.

The question we should be asking is not why might Putin invade the Ukraine, but why now?

It is because now more than ever Putin smells weakness.  He knows the West has no appetite for war.  It is burdened by high public debt and low resolve in the middle of a pandemic. Putin was likely further invigorated by America’s ignominious withdrawal from Afghanistan and its attention being focused on China. Europe is also particularly sensitive to Russian gas supplies given the current shortage crisis and unlikely to kick up much of a fuss if he does invade.

And – contrary to popular belief and the portrayal he loves to put out there, that of Russia being a weak nation, militarily outmuscled by the West and NATO; it is anything but.  In fact, under Putin, the Russian military has been modernised to the extent where it poses a critical threat to NATO positions.  While Western forces have on the whole turned to smaller, more mobile battle units that are geared more for urban and counterinsurgency scenarios, Russia has continued to develop its military along more conventional and traditional lines.  It now has more tanks than all of NATO combined – at around 20,000.

Russia has also developed hypersonic missiles that famously caught U.S generals unawares recently.  These missiles can fly very fast and low – up to Mach 6 – and do not show up on traditional early warning systems and can evade American anti-missile shields with ease.

The other problem of course is that you can have as big a military force as you like but if it is not stationed on the ground in the right places then it counts for nothing.  Since the invasion of Crimea, NATO has stationed four forward-positioned battalions (one battalion is approx. 400-strong) as part of its “Enhanced Forward Presence” in countries most likely to be attacked by Russia – namely, Poland and the Baltic States.  These would be overrun in a matter of hours in the currently unlikely event that Putin decided to invade.  The Royal United Services Institute (RUSI), the world’s and the U.K’s oldest defence and security-related think-tank, claims that U.K forces are “comprehensively outgunned” in Eastern Europe.

Essentially Putin knows he has the upper-hand at this moment in every respect, and, given his past actions, he is not about to back down – especially as he knows he might lose that advantage in the near future if NATO forces were to find the resolve to and were allowed to organise on his doorstep. It is likely he will press his advantage, and keep pressing it in the hope of ultimately achieving that which his actions and words points to as being the one thing and one thing alone he desires.