This is how a Superpower dies… State Sponsors of Terrorism and U.S. Foreign Policy in Sudan 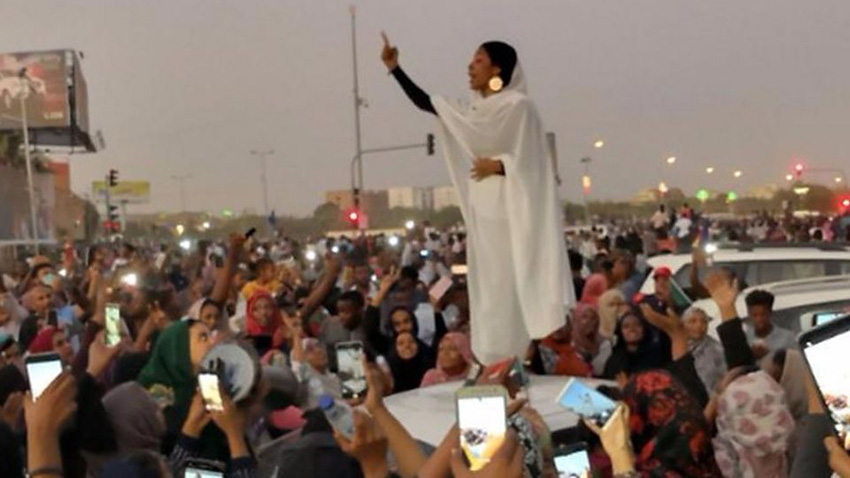 A superpower begins to fade under the weight of its bloated size and over-confidence.  Through arrogance and careless mis-steps it bungles and self-sabotages to the point it starts creating problems it could have easily avoided, undermining its strength and capacity to shape global events to its will along the way.

Nowhere are these early seeds of destruction for U.S. better-exposed than in its dealings with Sudan.

The fact this outlier of a country somewhere in Northern Africa and just beyond the Horn of Africa is not on anyone’s radar means U.S. foreign policy towards it has developed unhindered by serious geopolitical considerations and the attention of the world’s media.  And for that reason, even if it is largely inconsequential, we get a clearer glimpse of the wider malaise at the heart of U.S. dealings with the world at large.

Many might remember images on news networks of last year’s mass protests and civilian uprising in Sudan that finally overthrew the Islamic fundamentalist regime of Omar al-Bashir that had ruled the country since the late 80s.

It was achieved through the courage and blood of the Sudanese people themselves.

The June 3rd massacre in the capital, Khartoum in particular stands out as one of the more terrible moments of the uprising when government-backed militia forces opened fire on peaceful protestors and killed over 100 people.  Nonetheless the movement prevailed and a transitional government was put in place lead by Prime Minister Abdalla Hamdok that is paving the way for open democratic elections in 2022.

The transitional government is desperate to normalise relations with the international community so it can access much-needed funds through the international banking system and in particular debt relief through the IMF and World Bank.  Covid-19 has made this all the more urgent of course placing the country under extra strain.

To be welcomed back to the bosom of the international community though, Sudan needs first and foremost to be removed from the U.S. State Sponsors of Terrorism List.

The list is as exclusive as the infamous Las Vegas Black Book.

In fact, it is far more exclusive.  There are about 35 people in the black book whereas there are at present four countries on the State Sponsor of Terrorism List, far closer to the number Joe Pesci mentions in Scorsese’s epic Casino.  It includes the usual suspects Iran, North Korea and Syria.  And just like the Las Vegas Black Book, it is notoriously hard to get removed from the list.

Once on it, the country in question loses its sovereign immunity before U.S. courts too.  Like most things American in the pre-Trump age, this was a well-intended but hugely clumsy bit of legislation that forces state sponsors to pay victims of terrorist attacks directly and therefore act as a deterrent.

For Sudan, this has become the main sticking point. There have been a flood of private compensation claims lodged by the victims and relatives of the embassy bombings in Nairobi, Kenya and Dar Es Salaam, Tanzania in August 1998 in U.S. courts that now total over US$10 billion.

U.S. Secretary of State, Mike Pompeo was in the Sudanese capital Khartoum last Tuesday 25th August to finalise agreement to remove the country from the list with Mr Hamdok.  The Sudanese agreed to put US$335 million in an escrow account to cover the compensation claims of the victims and the relatives of those who suffered in the two embassy bombings.  This is a relatively small slice of the total, but it still remains unclear where Sudan will find the funds to cover the amount.  So desperate is it to re-join the international community though, that it is prepared to accept the figure and add to its ominous external debt burden of around US$60 billion.  Apart from the economic fallout for Sudan’s fragile economy there is also the blow-back from its own populace who view the compensation claims as opportunistic.  The deal threatens to unsettle a fragile country trying to find its feet for the first time in decades.

To understand the mess, we must take a step back.

Sudan was first placed on the list in 1993 when the previous regime, under Omar al-Bashir flirted with supporting international terrorist groups.  It invited Osama Bin Laden and the upper echelons of the Al-Qaeda to reside in the country.  There the terrorist network financially consolidated their operations through the running of various import and export businesses and ran training camps instructing would-be terrorists in guns and explosives.  The Sudanese government, under heavy pressure from U.S. eventually saw the error of its way and expelled the group in 1996.

It has paid a very heavy price for this mistake ever since.

When al-Qaeda committed the U.S. embassy bombings in Nairobi and Dar Es Salaam two years later, killing 224 people and injuring over 4,500, Sudan was implicated even though by then they had severed all ties with the terrorist organization.  In fact, al-Bashir’s regime began co-operating with U.S. to combat terrorism in the Horn of Africa shortly after expelling the group and this co-operation deepened following the 9/11 attacks for fear of reprisals.  Sudan actually offered to either hand over Osama Bin Laden to U.S. (handing him over to Saudi Arabia first as an intermediary) or at least allow him to stay and place him under close surveillance on behalf of U.S. in 1996 but the Clinton Administration declined or at least hesitated and OBL flew the nest to Afghanistan.

Let me repeat that.

The Sudanese government offered to arrest OBL in 1996 and turn him over to U.S. via Saudi Arabia.

President Clinton often cites not intervening in Rwanda as his biggest foreign policy blunder. Surely this ranks as high at the very least.

It is morally questionable whether demanding that the new transitional government, borne out of the blood and protests of the civilian population should even have to pay for the crimes of the past regime it overthrew at great collective cost.  But practically the U.S. risks tipping the country back into chaos with the demands.  This is where U.S short-sightedness and lack of planning becomes apparent by not seizing the moment to help lift another former dictatorship into the light of democracy and one that could become a close ally in the region. Instead U.S. has in this case allowed its private justice system to dictate foreign policy that could easily tilt a fragile democracy back into anarchy in the process.  And create a bigger mess that it might have to step in in the future in some way at greater expense and energy.

As discussed above, it is questionable whether the al-Bashir regime itself deserves the blame for the terrorist horrors for which it has been legally lumbered with.

In no way should the former regime be let off the hook for the many atrocities it has committed and in particular in Darfur and the ethnic cleansing that took place there about a decade later.  But it is too easy to dump crimes on the doorstep of an otherwise foul regime for which it is not culpable.   To do so and not to question the facts leads to the mess that WMDs and Iraq did for the perception and integrity of U.S. power and the legitimacy of foreign interventions by Western countries.

In much the same way as international sanctions are usually ‘smart’ these days and targeted to have maximum impact on those complicit in the misdeeds in question, such as even al-Bashir’s own indictment by the ICC for Darfur itself, surely the sponsors of state terrorism list should be the same and not affect the peoples of a country disproportionately – especially peoples who risked life and limb in last year’s civilian uprising to secure democratic freedoms.

Surely this would be in the best long-term U.S. interests in the region?

Instead this moment of unique historic opportunity in Sudan is effectively held to ransom by the private collective interests of the victims and the relatives of terrible atrocities that are only tentatively linked back to the country in question.

In no way am I suggesting that the victims and their relatives of the terrible bombings in Nairobi and Dar Es Salaam who still wait today for some form of apology or compensation shouldn’t be fully accommodated in one way or another.  But by scapegoating a country in its time of need is to create even more victims in this already sordid business.

Sudan – far-off, far-flung and often forgotten – is a shining example of poor U.S. foreign policy decision-making on both sides of the political aisle.  Blunders that have large knock-on effects further down the line and that eventually and ultimately erode U.S. power and hegemony.

If U.S. under President Clinton had accepted Sudan’s offer to arrest OBL and there had been no 9/11 and no Afghanistan or Iraq war, what a different world we might be living in today.